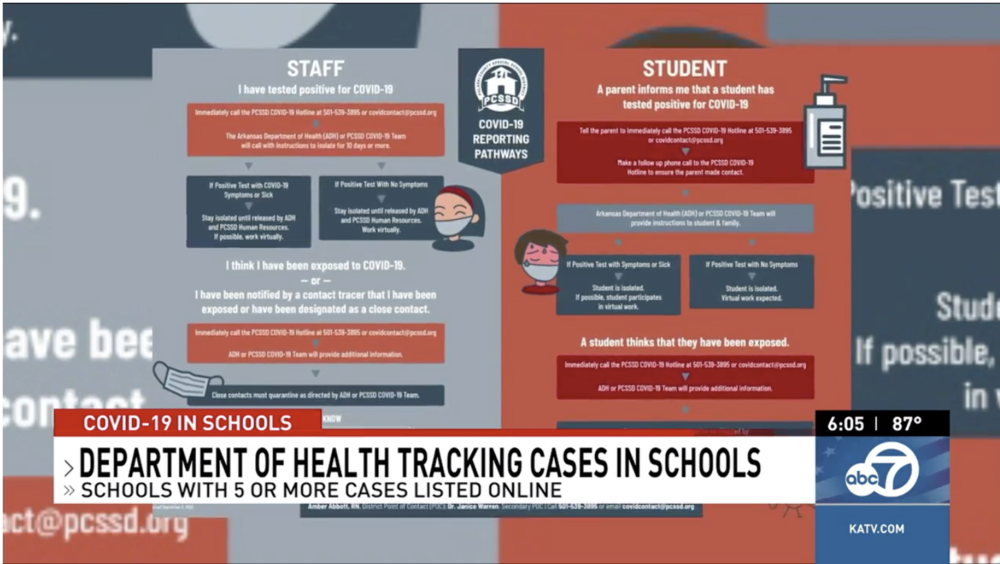 LITTLE ROCK (KATV) — As the school year wears on, school districts across Arkansas are doing what they can to control the spread of the coronavirus.

"We've done a really good job at not having any internal transmission so far, all of them have been outside the community," said Jessica Duff, a spokesperson for the Pulaski County Special School District.

Duff says when a staff member or a student tests positive, they or their parent must notify the district's COVID-19 hotline. The case is then reported to the Arkansas Department of Health.

"At that point, we will go through the contact tracing process to let anyone know who qualifies as a close contact that they would need to quarantine," she said.

So far PCSSD has not had to shut down any schools due to the virus. But Duff says it could happen if a school had a high number of staff members in quarantine.

"It may not be the number of cases, but if your contact tracing team ends up quarantining several people, it can become an issue," Duff said.

Every Monday and Thursday, the department of health updates a public list of school districts in the state with five or more active cases with the virus. Joel Tumlison with ADH says the cases aren't broken down by each school for privacy reasons.

"If we listed it less than five and there were two cases in a school, it would be very easy for parents and students to find out who the exact person was that is positive," Tumilson said. But he says those who may be impacted by a positive case will be notified.

"The contact tracers will get in touch with those who are close contacts," Tumilson said.

You can see the Arkansas Department of Health's report here.